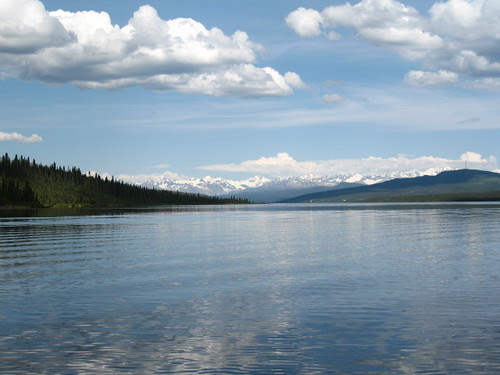 ever tried to keep a journal or diary? i have. it's always gone in spurts. life speeds up, slows down, and the habit comes and goes. the absolute worst has always been picking it back up. where to start? do i owe it to myself, posterity and anal-retentiveness to record everything i remember from the gaps? i've tried that. it doesn't work so well. the immense task of catching up on the past while trying to sort through the present is overwhelming. and so i've slowly learned to let go. some bits may be important to put down for context (as when a gap started with an unboyfriend and ended with someone else installed as husband) but otherwise it's best to start fresh.

global warming has attacked alaska with the coldest april on record. there's still 2 feet of snow in my back yard. which, no, is not normal. my silver lining is to consider it extra time granted by the weather sprites to work on indoor projects that i would have already abandoned for yard work and the woods. time to finish those projects languishing in the work basket and corners of my mind. also working through that stack of library books.....

and so last friday i sat down to make a soap cover, a spa coat, a soap sweater, a what-have-you. i made 2 in september, one for chuck and one for myself. mine has come in very handy, and it's only at the end of a bar of soap that i run into a minor problem: how to wash it (to rid it of fuzzies and soap residue) without missing our daily constitutional together. the bar of soap has yet to conveniently run out on wash day, and at last i realized the best solution was in fact to have two of the suckers. one in use, and one in the wash. simple, and rather embarrassingly obvious after the fact. 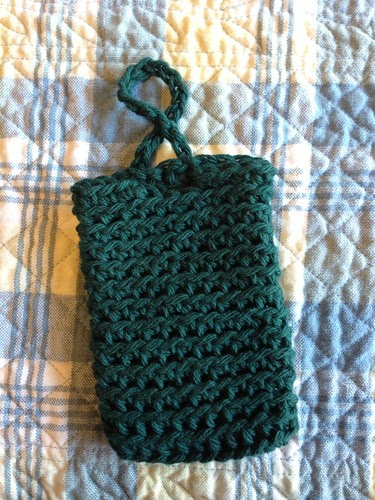 luckily they crochet up quickly, in an hour or so. the crochet is bulky enough to maintain structure as the soap dwindles, and i prefer it to the knit versions. i also added a built-in hanging loop to chuck's knitted cover. the original twisted cord was a hassle to knot and hang, and then untie for a new bar of soap. 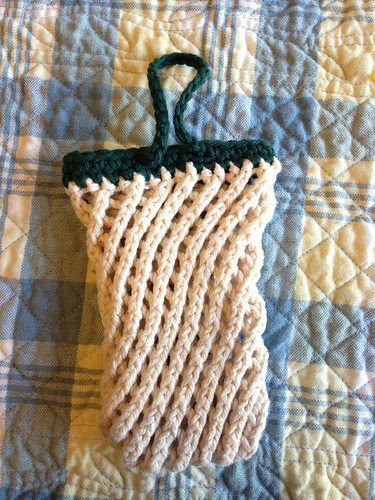 small projects, yet satisfyingly useful. and fast. which takes one bit of project clutter out of my head. now two, if you count actually posting again. and that's a better and faster fresh start than spring is having this year.
Posted by the boogeyman's wife at 14:40 No comments:

ever since i stumbled across a quote about teaching the alphabet to the ants, pinocchio has been on my to-read list. it's bit of a random story, not surprising for a print-by-the-week story. pinocchio's adventures include the ones featured in the disney film, as well as more outrageous ones. he goes from one scrape to another despite his promises to work hard and obey. eventually his bouts of diligence are longer than his vagabond periods, but it is only when he must nurse geppetto that he works and serves his father with his whole heart.

there's an undercurrent of christian ethics seen in the oft-repeated morals of working hard and helping others. overtones of the prodigal son story and bits of isaiah (where the righteous are judged against and the prisoners are set free) show up in the second half of the story. pinocchio's is a highly dramatized, often ridiculous, story that is nevertheless easy to relate to. i love the repeated maxim that little boys who won't learn and work turn into little donkeys, which is literally fulfilled by pinocchio and his friends. if i had a little boy, that's what i'd tell him to get him to do his homework.
Posted by the boogeyman's wife at 15:15 No comments:

i am nujood, age 10 and divorced by nujood ali

this book caught my eye on the fancy updates our library sends out now. very simple and descriptive prose makes for fast reading. the confusion of a 10-yr-old thrust into marriage with no idea what that entails comes through clearly. an insider's picture of life in yemen is marred by violence against women, which is rarely acknowledged and more rarely discussed. i expected some legal drama perhaps. instead, the book is told entirely from nujood's perspective and based on her limited knowledge which only increases its impact. for me, this book touches on the right of any person to make their own choices much more than a western vs. eastern theme. and yet i can't help wondering what men (anyone) are really thinking when they follow destructive traditions.
Posted by the boogeyman's wife at 13:17 1 comment:

this is a good YA novel. paper towns starts at the end of high school, with a nerdy guy drooling over the hot girl next door, and his one big chance for adventure. which turns into his chance to (possibly) have the girl of his dreams, solve a mystery and learn how hard it is to truly know anyone. there's introspection on how we relate to and understand others. there's also the obligatory teen drinking and sex although not in painful detail, thankfully. and yet this book is not chained to the stereotypes it invokes and is surprisingly true to reality, where no matter how much you've thought something through and changed your perspective, something can still come out of nowhere and knock you on your back. over and over again. good stuff.
Posted by the boogeyman's wife at 14:40 No comments:

i'm working on it

Digging in the past